Schneeeule and the Revival of the Berliner Weisse

Schneeeule and the Revival of the Berliner Weisse

“I try to make every beer I produce my dream beer”, states Ulrike Genz, head brewer and co-founder of Schneeeule. Schneeeule, translating to Snowy Owl, is a brewery based in Berlin, Germany, focused on Berliner Weisse-style sour beers, in addition to other wild and sour brews. In a past life, Genz was a practicing civil engineer. However, desiring a change of direction, she returned to university to study microbiology at TU Berlin. She specialized in Brewing and when a local brewmaster brewed a historical Berliner Weisse, Genz quickly fell in love with the style. Since then, she has been instrumental in the revitalization of the Berliner Weisse style in Berlin.

What exactly is a Berliner Weisse? I asked, pretending it was for the benefit of the readers but just as much for myself (though I have drank my fair share of Berliner Weisse, the technicalities are still a huge mystery). Due to the name, unsuspecting consumers often confuse the style with a typical German wheat, which can lead to some pleasant or not so pleasant surprises, depending on how they feel about sour beers. A real Berliner Weisse, according to Genz, is a top-fermenting & bottle conditioned wheat beer with added Brettanomyces and lactobacillus. Finally, to qualify, it must be brewed in Berlin. The style is slightly sour, and gets some fruity aromas from the brett. Over time, the bottle-fermented beer becomes more carbonated, which is how it historically gained the nickname “The Champagne of the North”. The style itself is over 300 years old.

Genz was patient enough to give me a mini history lesson. I learned that, in the 19th century, there were around 100 different breweries making this style, and it could have been found in around 700 different bars. However, after World War II, only 6 breweries remained that produced real Berliner Weisse, explains Genz, and the last of those closed in 1996. Only Berliner Kindl was left, producing a sort of knock-off Berliner Weisse beer with added syrups, which is sweet and unrecognizable compared to its more elegant forebear. This is what most Germans typically associate with the Berliner Weisse style, though Genz adds that Kindl themselves don’t even call what they make a Berliner Weisse.

Until 2012, when Brewbaker Brewery opened, there was no real Berliner Weisse available in Berlin. This is when a friend of Genz, Andreas Bogk, started sampling brett yeast strains from old bottles of traditional Berliner Weisse that he scavenged from flea markets, bought on ebay, or even found in people’s basements. In 2015, Genz joined the project, and in 2016 she created Schneeeule. She is still reusing these brett strains to make her own Berliner Weisse beers, and sticking to the brewing methods of the original breweries. In fact, Genz has been isolating the yeast strains found in various bottles from those six Berliner Weisse breweries that had shut in 1996. As if scavenging for rare yeast from long-forgotten breweries doesn’t sound hard enough, Genz also fills, caps, and labels all her bottles by hand herself!

The Schneeeule core-range, despite being all Berliner Weisses, is an extraordinarily diverse collection. All bottle decals feature a great snowy owl, wings spread wide. Genz explained that the owl is a symbol for knowledge, which represents her passion for educating others about the Berliner Weisse style. The pearly white wings also symbolize the foamy head typical of an aged Weisse when poured, she adds. Within the core-range, you can find traditional Berliner Weisse styles, in addition to more experimental styles, such as a Berliner Weisse brewed with ginger and habaneros. I am currently drinking the Yasmin, which is a Berliner Weisse brewed with jasmine flowers. It is light, refreshing, and elegantly executed. However, my favorite is the Irmgard, which was named after Irmgard Keun, an author whose writings were banned during the Third Reich in Germany. The Irmgard wort was flavored with ginger, lemon, orange, and pomegranate zest, resulting in a gingery and earthy Berliner Weisse. If those somehow don’t interest you, try the Kennedy, which is a dry-hopped Berliner Weisse. The most recent batch of Kennedy was hopped with Monroe and Callista. However, the Marlene, named for Marlene Dietrich, is the best representation of the traditional Berliner Weisse style according to Genz.

Schneeeule also has a collection of larger bottles, perfect for sharing. Flora is a wild ale that varies every year, depending on the flowers collected. Her 2018 blend focused on elderflowers, jasmine, roses, and hops. This recent batch in particular features flavors collected near the brewery at the Tegler See in Berlin. Sandy, a large Wild & Sour ale, is a collaboration between Schneeeule and Brewers Tribute brewed with Seabuckthorn. 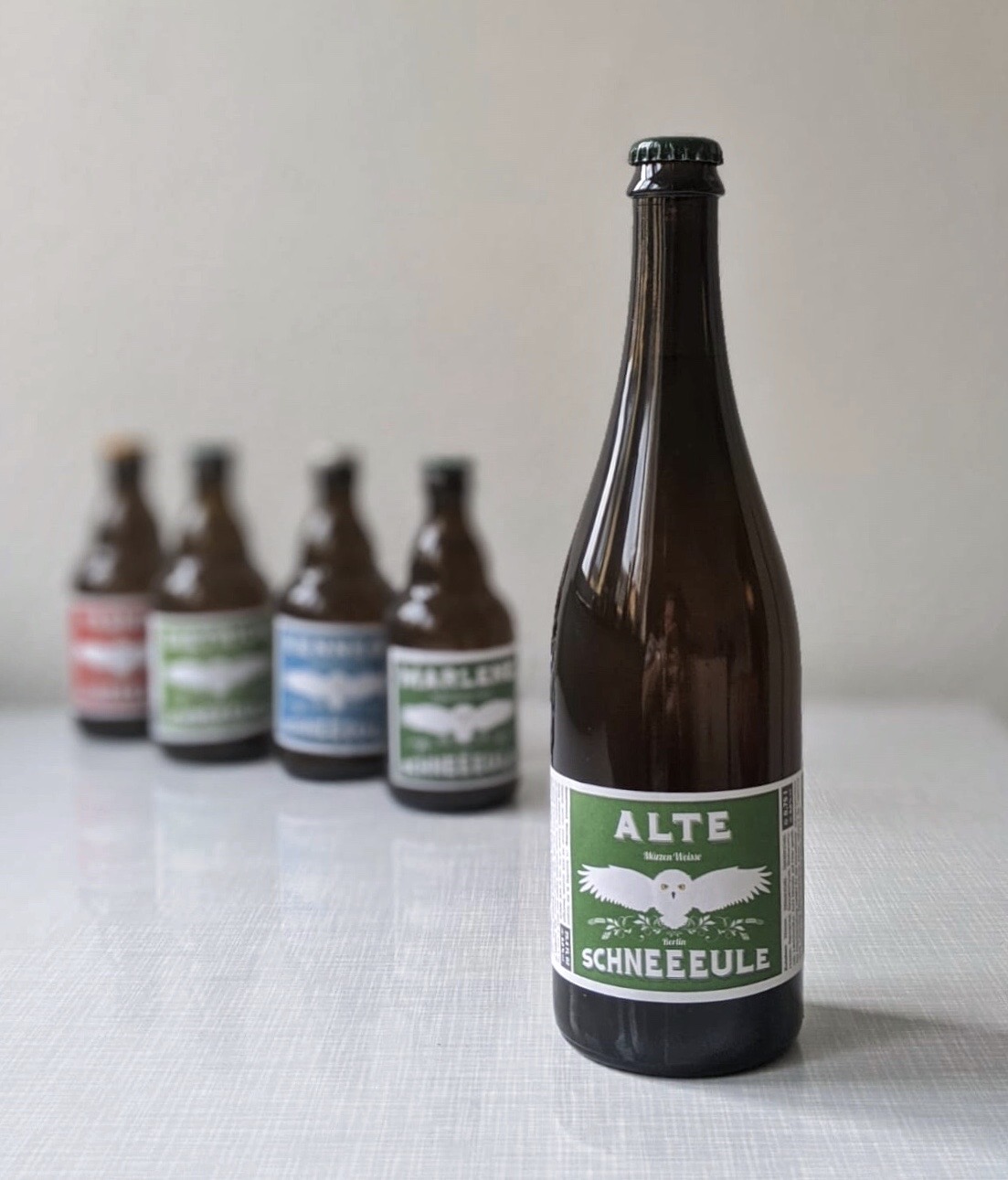 Genz has also participated in Pink Boots Society collaboration brews. Despite the male-dominated beer world, Genz remarks that Berlin and Europe is full of strong beer women. Most recently, I tried These Boots are Made for Working, a Pink Boots collaboration featuring Schneeeule, BRLO, Brewdog DE, and others, which was a strong reminder that I simply love American wheat styles.

Despite being a one-woman company, Genz has big plans. A Berlin taproom is in the works, and expected to open this summer. The space will have some taps, but will mostly feature her extensive collection of bottled Berliner Weisses. Genz has been aging her own beers, and bottles that are up to 5 years old will be available. Additionally, she plans to have a selection of both Berlin and other international beers available on site. A small bar, she describes it as “gemütlich”, translating to cozy or friendly, much like a comfortable living room. A place for her to present her beers the way they deserve to be enjoyed and learned about, but also a lovely spot to get drunk, she adds. Please and thank you, I say.

When asked what she would like to see change in the current beer world, Genz requested “stop making fake Berliners!” referring to the syrupy overly sweet interpretation of the style. With that, you owe it to yourself to track down a Schneeeule creation. Outside of Germany, you can find her beers in Belgium, Denmark, Japan, Finland, Russia, and soon in the Netherlands and Ontario, Canada! Schneeeule is also available in various bars and bottle shops throughout Germany. However, for the full experience, keep your eyes peeled for the opening of her taproom in Berlin. Cheers, Ulrike!

1 comment on “Schneeeule and the Revival of the Berliner Weisse”