We’re halfway through what has been a crazy and uncertain year so far. While nobody knows what tomorrow will bring there is one thing that is certain, that is that restaurants and breweries are ready to get back to whatever “the new normal” may be these days. In many states these places have been allowed to open up at 50% capacity which, is a sign that maybe we are coming out alright on the other end of this pandemic. Since breweries are slowly reopening here in Idaho, I decided to get out of the house this past weekend! I had to go and see for myself how these breweries are handling the reopening and I must say, I was not disappointed.

The first stop on my adventure was to Edge Brewing in Boise, ID. Edge Brewing is a place I had been dying to try in person. I have enjoyed picking up their beer from the local grocery store, and I constantly see the mouthwatering pictures of food they display alongside their delicious brews on Instagram. I arrived to a packed parking lot, at their Steelhead location. I considered this a great sign.

It is amazing to see that people were willing to come out and support, because to be honest nobody knew how this was going to go. I entered and noticed that everybody was sitting at tables well-spaced out from one another and the workers had on masks for the safety of the patrons. Immediately I was seated, and ordered up their Edge Amber which has a deliciously smooth finish. Perfect for a hot summer day. Then I ordered their Pugzilla IPA which is sure to leave a citrusy after taste that compliments just about anything you choose to eat. All in all, the experience was wonderful. Everyone was respectful of one another and the service was excellent. It was a great start on the road to normalcy.

I then continued my adventure the next day by heading to the small mountain getaway town of McCall, ID. It is located three hours north, and has just under 3,000 people. It sits right on Payette Lake and is known for its summer lake front fun, and winter time skiing. They have three breweries and I chose to head to the namesake, McCall Brewing. It’s an English style brewery that serves food that compliments their beer selection. From, Sheppard’s pie to Bangers and Mash.

Right from the get go there was an air of what once was. Although seated at half capacity the brewery was alive with conversation and flowing beers. I ordered a flight to get a taste of everything I could in a short time. My recommendation for this brewery is their Imperial Stout, Devious Intent. Right from the first sip you are hit with a wave of chocolate warmth with a smooth brown sugary aftertaste. It compliments their Sheppard’s pie excellently (although you can’t go wrong with their Hippie Hopped Pale Ale either). I swear no sooner had I ordered my beer and food did everything appear as though I was at Hogwarts Castle itself! Again another amazing experience as everybody finds their groove on the first weekend back to the way things were.

Our New Normal is Not So Bad

All in all, what I found our new normal to be is that these places are doing their absolute best to serve us all with that happiness and normalcy we have craved since the pandemic began. They are cranking the food out at speeds I have never seen before and the beer is more delicious and fresher than ever. It’s a welcome sight to see. If you are as excited as I am to be able to enjoy a nice cold pint in the brewery itself, I say get on out there! The industry is more alive than ever and the beer adventures await! 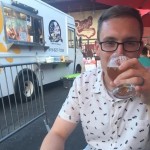